by Team ThriveNaija
in Health
0

If you have been wondering ways of exploring the health benefits of cinnamon, you are at the right place, just sit tight and read on.

Cinnamon is a highly delicious spice that has been used medicinally around the world for thousands of years.

In many cultures, cinnamon is still used daily due to its numerous health benefits.

A report has it that cinnamon ranks number 1 in terms of protective antioxidant levels out of twenty-six most popular herbs and medicinal spices in the world (1).

This ground spice actually comes from the back of the Cinnamomum tree.

This tree back contains numerous health-boosting compounds which are responsible for its numerous healthy properties including cinnamaldehyde, cinnamic acid, and cinnamate.

The health benefits of cinnamon are usually obtained from its pure back, ground spice form (gotten from the back powder), and essential oil or in extract form.

A pinch of cinnamon goes a long way in addressing several health challenges due to its rich antioxidant content.

A ½ or 1 teaspoon of cinnamon daily can have a significant effect on digestion, blood sugar levels, heart health, immunity, cancer, neurodegenerative disease and so much more.

One teaspoon of cinnamon (ground) contains about:

Cinnamon contains a variety of antioxidants that helps mop up free radicals in the body.

So far, 41 different protective compounds have been identified in cinnamon (2) (3)

Cinnamon is packed with powerful antioxidants called polyphenols, phenolic acid, and flavonoids and contributes to its numerous health benefits (4, 5, 6).

Research which compared the antioxidant activity of 26 spices ranks cinnamon number one even above “superfoods” like garlic, rosemary, thyme and oregano (1).

Furthermore, the OTAC scale which measures the concentration of antioxidant in different food ranks cinnamon number 7 above all foods, herbs, and spices across the world.

Additionally, cinnamon is so powerful that it can be used as a natural food preservative (7).

The antioxidant content of cinnamon is known to have anti-inflammatory properties, which may combat inflammation.

Inflammation can be a predisposing factor for numerous chronic diseases.

However, studies have identified over seven types of flavonoid compounds in cinnamon, which are very potent in combating inflammation.

Because of its anti-inflammatory property, cinnamon can be beneficial in relieving muscle soreness, the severity of allergic reactions, and age-related symptoms of pain (8, 9).

Cinnamon is very beneficial in reducing the risk of heart disease, which is the most common cause of premature death worldwide.

A recent study reveals that a cinnamon dose of just 120 mg per day can have these effect and increase HDL “good” cholesterol (11).

Cinnamon is also known to reduce hypertension, which is another risk factor for heart attack and stroke (12).

Combining all these factors, cinnamon may drastically reduce the risk of heart disease. 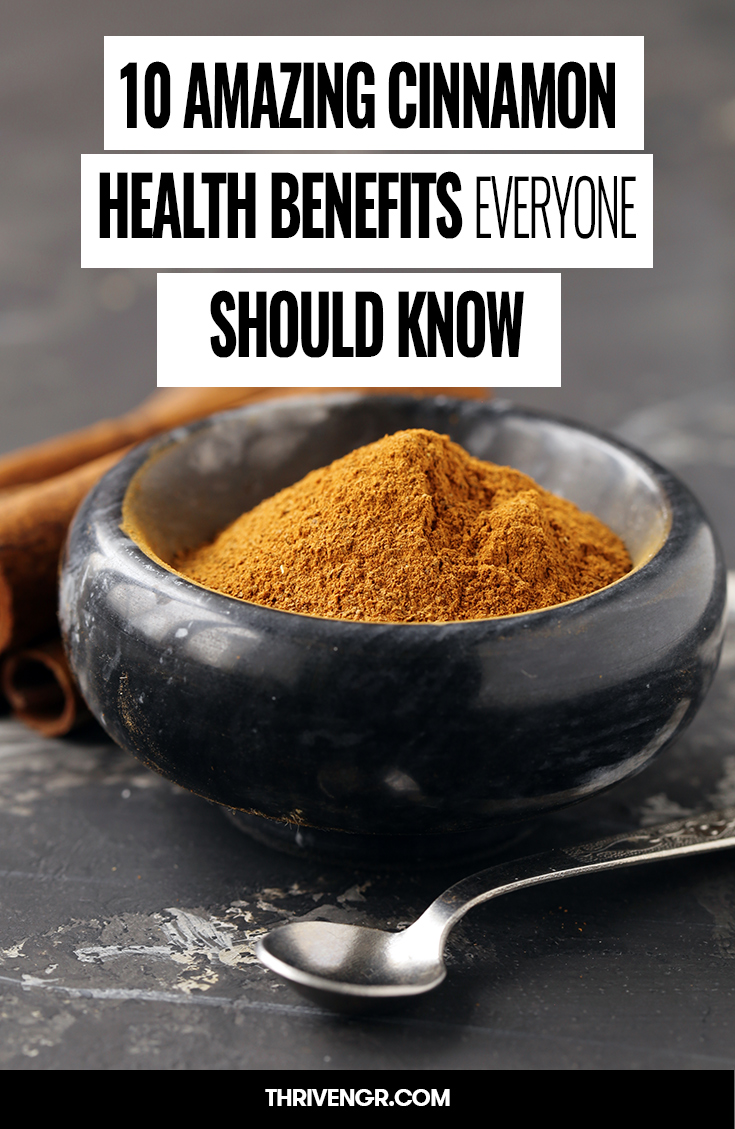 One of the most outstanding health benefits of cinnamon is its blood sugar lowering effect.

It also improves insulin sensitivity which is vital in keeping blood sugar levels under control (13).

Apart from its effect on insulin sensitivity, cinnamon can reduce blood sugar level via several mechanisms.

First, cinnamon has been shown to reduce the uptake of glucose into the bloodstream after a meal.

It does this by inhibiting certain digestive enzymes, which slows the digestion of carbohydrates in the intestine (14, 15).

Second, a certain compound found in cinnamon acts by mimicking the action of insulin (16, 17).

This greatly facilitates uptake of glucose by cells, although it is much slower in action than insulin.

Studies have confirmed the anti-diabetic effects of cinnamon. This study shows that cinnamon can lower fasting blood sugar levels by up to 10 – 29 percent (18, 19, 20).

Another study reveals that people with type 2 diabetes can experience a dramatic positive effect on blood sugar levels by taking cinnamon extract as a supplement (21).

5. Protects the Brain Against Neurodegenerative Diseases

One of the health benefits of cinnamon’s protective antioxidant is that they can protect the brain against neurodegenerative disease.

Neurodegenerative diseases are characterized by loss of function or structure of brain cells, Alzheimer’s and Parkinson’s disease are the two most common.

Notably, two organic compounds found in cinnamon seem to inhibit the accumulation of a protein called tau in the brain, which is one of the characteristics of Alzheimer’s disease (22, 23, 24).

Because of its strong antioxidant activities, cinnamon can protect against DNA damage, tumor growth, and cell mutation.

Cancer is a very serious disease characterized by abnormal growth of cells with the potential of invading other parts of the body.

Numerous studies have been carried out for the potential use of cinnamon in cancer prevention and treatment.

So far, scientific evidence is limited to animal studies and test tube experiments, which suggest that cinnamon extracts may protect against cancer (26, 27, 28, 29, 30).

A compound called cinnamaldehyde found in cinnamon has an anti-cancer ability. This compound acts by inhibiting the growth of cancer cells and the formation of blood vessels in tumors and stimulating cell death (apoptosis) (28).

A study reveals that cinnamon can be a potent activator of detoxifying enzymes in the colon, reducing the risk of colon cancer (31).

It is worthy of note that, research done so far are not on humans, whether they have any effect on humans needs to be confirmed in controlled trials.

Another important health benefit of cinnamon is fighting against infections.

However, the main immune-boosting abilities of cinnamon are found in its essential oils (32). These oils have been shown to effectively treat respiratory tract infections caused by fungi.

It is also known to inhibit certain bacteria like Salmonella and Listeria  (33, 34).

Cinnamon has the potential of fighting HIV Virus

HIV is a deadly virus that breaks down the immune system, which ultimately lead to AIDS if not treated.

Cinnamon extracted from Cassia varieties is believed to help combat against HIV-1 (37, 38). HIV-1 is the most common strain of the HIV virus in humans.

A small study carried out on HIV infected cells reveals that cinnamon was the most effective treatment of all 69 medicinal plants studied (39).

However, human trials are yet to be carried out to confirm these effects.

Cinnamon may also be beneficial for skin health.

Due to its antibiotic and anti-microbial effects, they protect the skin from rashes, irritations, infections and allergic reactions.

Topical application of cinnamon oil on the skin can help in reducing inflammation, pain, swelling, and redness.

Cinnamon in combination with honey can be used to boost skin health and are beneficial for acne, rosacea, and signs of skin allergies.

Cinnamon can also prove effective in weight loss, due to their effect on blood glucose levels.

Cinnamon which improves insulin sensitivity aids in boosting metabolism. When your metabolic rate is high, healthy carbohydrate will be stored for energy rather than as fat.

In addition, cinnamon is also used in detox drinks due to its appetite and suppression qualities.

This will help you feel fuller for a longer period without unnecessary snacking between meals (40).

Having gone through these 10 amazing health benefits of cinnamon, it can be said that cinnamon is one of the most delicious and healthiest spices on Earth.

Importantly, try to get Ceylon cinnamon, or rather stick to small doses of Cassia variety it that is what you are using.