by Emmanuel
in Food
0

Pear is a delicious fruit that has been widely used since ancient time. Besides being refreshing and filling, pears are also packed with nutrients which contributes to its numerous health benefits.

Generally, pears belong to the genus Pyrus and are scientifically called Pyrus communis which is a part of the larger family Rosaceae.

They are also considered a pomaceous fruit is grown on a number of different pear trees. Although there are a large variety of pear trees, a few of them bear edible fruit that is commonly consumed by humans.

Consumption of pear has been linked to lower levels of constipation, kidney stones, and even diabetes.

Pears are one of the best sources of dietary fiber and contain a rich amount of vitamin C, K, and boron. They can also help lower inflammation which is a disposing factor to most chronic disease.

There is evidence that pears have been eaten since prehistoric times.

Most of the pears health benefits are attributed to its nutritional value.

Eating fresh, ripe pears once or twice in a week is a healthy habit we should all emulate. Here are seven stunning health benefits of eating pears.

1. Pears Are High in Fiber

Pear is a high-fiber food as it contains about 5 grams of fiber.

Fiber which contains zero digestible calories is a necessary element of a healthy diet as it helps sustain healthy blood sugar levels and promotes bowel movements.

Most of the fiber in pears is a non-soluble polysaccharide (NSP), which makes it a bulking agent in the intestines. These fibers help accumulate food and add bulk for easy passage through the intestine.

Furthermore, this fiber works by binding to a fatty substance in the gut, including cholesterol and toxins promoting their easy elimination

This, therefore, means one of the health benefits of pear is in detoxification.

2. Pears Are A Rich Source of Vitamin C

Pears are a rich source of vitamin C which is a very powerful antioxidant that fights free radical damage and lower oxidative stress.

One medium-sized pear contains about 7 mg of vitamin C which is about 12 percent of the recommended dietary allowance.

Vitamin C is also very beneficial in protecting the DNA, stopping cell mutation, tissue repair and maintaining a healthy metabolism. Also, it is also beneficial for smooth skin and has anti-aging effects.

3. Pears And Their Antioxidants Activity

In addition to its high vitamin C content, pear skins are also rich in important phytonutrients, including polyphenols, phenolic acids, and flavonoids, which can help fight disease.

A 2003 study published in the Journal of Agricultural and Food Chemistry reveals that diets containing pear and apple peel had a significant influence on the plasma lipid level and antioxidant activity than diets that discarded the peels (2).

Also, they also have anti-inflammatory and anti-cancer effects due to their high levels of essential nutrients like vitamin C, antioxidants and phytochemicals.

Not only that, but studies also reveal that daily consumption of fruits has positive effects on the body’s ability to prevent the growth of cancer cells, reduce inflammation (3).

This is one of the primary reasons it is recommended to increase fruit and vegetable consumption among children and adults.

Pears are a good source of vitamin K and boron, two nutrients key to skeletal health. Lacking vitamin K exposes you to risk of bone-related disorders.

Experts even consider vitamin K to be one of the most important vitamins in fighting osteoporosis.

Although boron is often underutilized when it comes to the prevention of osteoporosis. Many health experts consider it an important part of preventing age-related bone disorders. 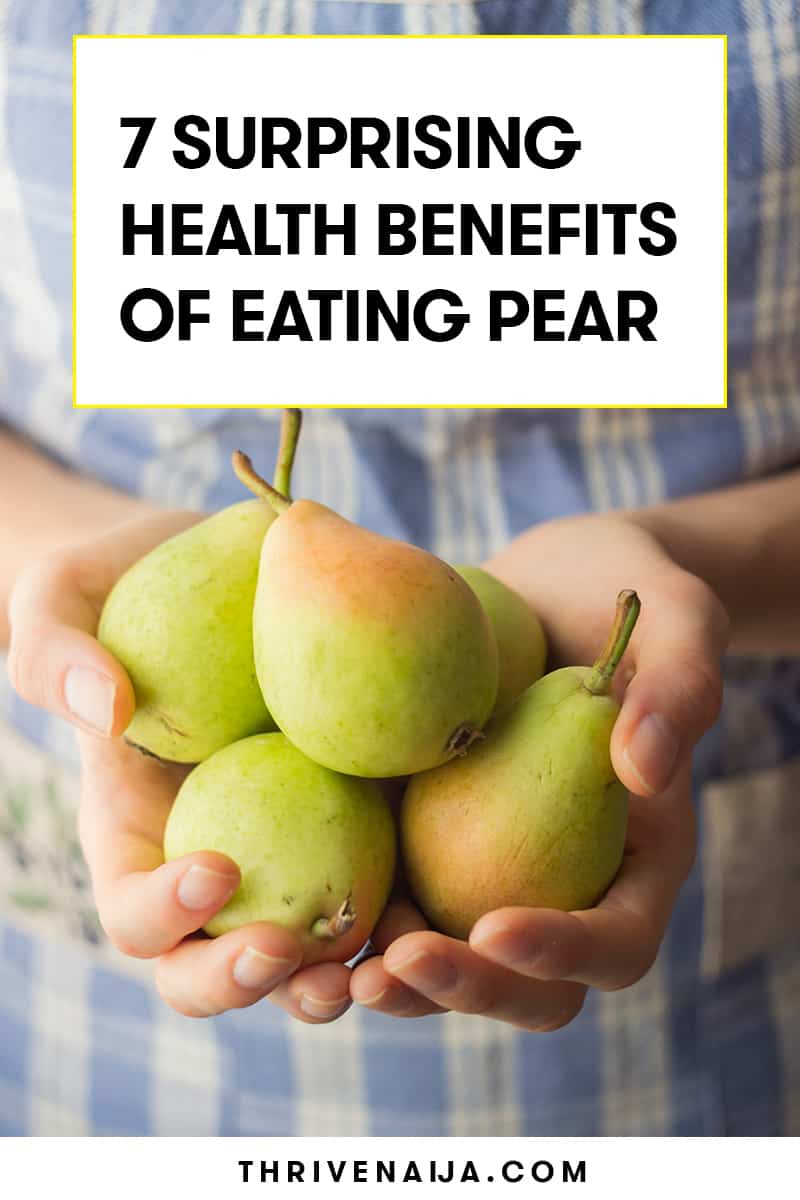 Fruit and vegetables have been used as protection against obesity.

It is also a known fact that consumption of high-fiber food is associated with weight loss.

Pear being a high-fiber food is very filling, preventing you from overeating.

Pear and other fruits contain natural sugar in the form of fructose.

But it is shown that higher fruits and vegetable intake are inversely associated with diabetes incidence particularly among women (5).

Also, research reveals that certain flavonoids in fruits including pears can improve insulin sensitivity, which is vital for diabetes prevention.

Furthermore, pears are considered a fruit with a low glycemic index.

One pear contains about 26 net grams of carbs with high fiber content. This defines its role in blood sugar control as they release sugar into the bloodstream slowly without a sudden spike in blood glucose.

This is one of the outstanding health benefits of pear.

When you consume a lot of fruit, you are lowering your risk of developing heart disease.

Epidemiological studies reveal that there is a correlation between a high fruit and vegetable intake and a lower risk for heart diseases, heart attacks, and strokes.

This benefit is probably due to the presence of antioxidant phytochemicals that help fights inflammation and prevent high levels of oxidative stress (6).

Everything You Can Buy From Belei, Amazon's New Beauty Skincare Brand

9 Healthy Foods That Boost Your Libido