A stomach ulcer, also known as gastric ulcer is a lesion or sore that normally develops in the inner lining of the stomach.

When an ulcer occurs in the upper part of the intestine (duodenum), it is called Duodenal Ulcer.

According to the American Gastroenterological Association, gastric ulcer normally occurs on the lining of the stomach or upper part of the stomach. About four million people have stomach ulcers, and one in every ten people suffers from an ulcer at least once in their lifetime.

The major causes of stomach ulcers are by the bacterium Helicobacter pylori (H. pylori) and irritation of the stomach lining by hydrochloric acid (Zollinger- Ellison Syndrome). Other factors include;

The pain might last from a few minutes to several hours, depending on the severity of the ulcers.

A stomach ulcer can affect people of different ages. If left untreated, the ulcer might get worse and result in a bleeding ulcer or even a hole in the stomach. 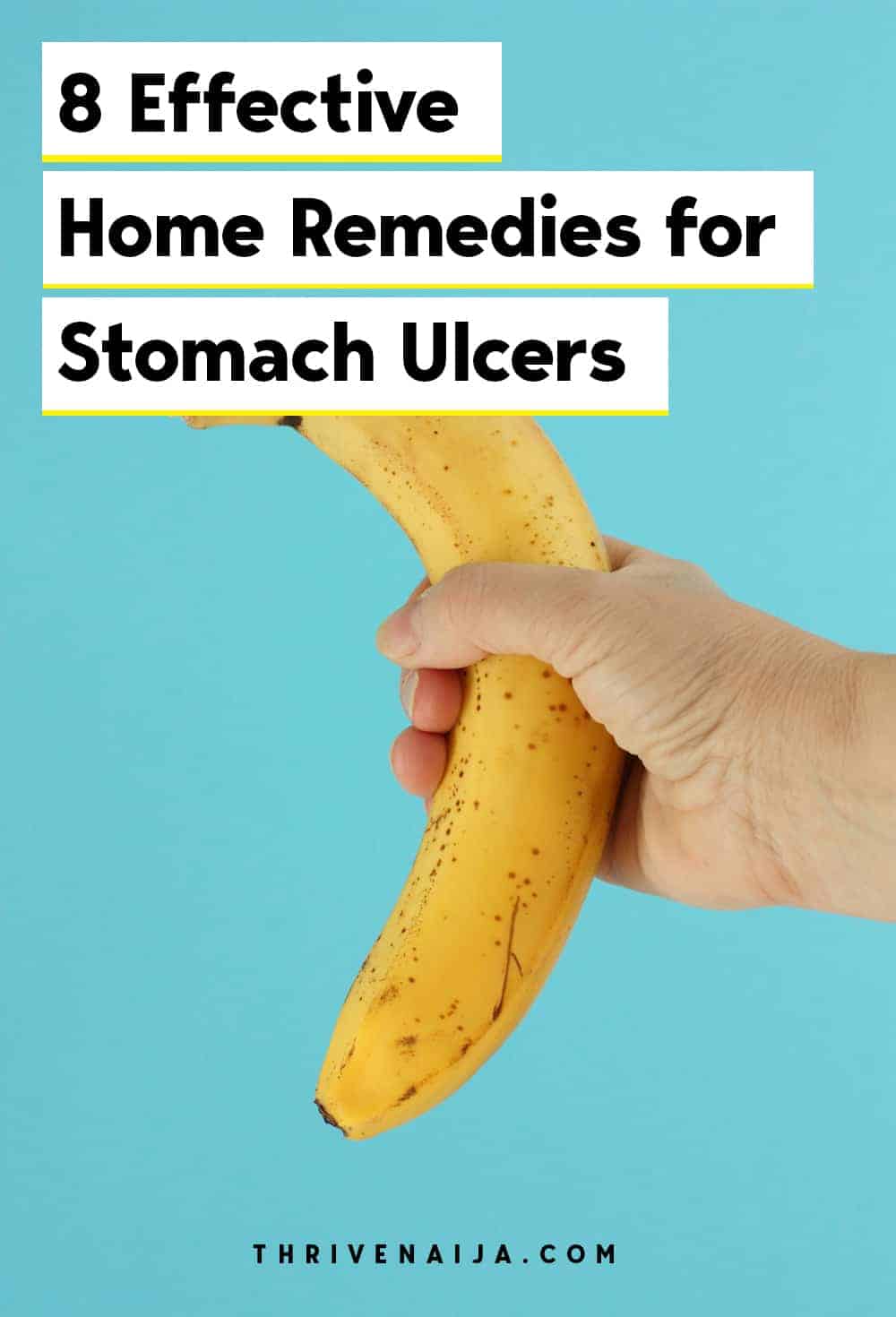 However, it is advisable to consult your doctor to ensure long-term relief.

This article highlights the eight most effective home remedies to get rid of stomach ulcer.

Banana could be all you need to get rid of stomach ulcers. Both ripe and unripe bananas can be very effective in treating an ulcer.

Research shows that they are certain anti-bacterial in bananas that inhibit the growth of ulcer-causing H. pylori.

What’s more, bananas neutralize the acidity of the gastric juice. This aids in protecting and strengthening the stomach lining.

It might be quite surprising to learn that cayenne pepper is a potent cure for a stomach ulcer.

According to a scientific study published in FEMS shows that the active compound of cayenne pepper, capsaicin inhibits the growth of H. pylori the most common cause of stomach ulcers.

Cabbage is one of the most effective home remedies for gastric ulcers. Being rich in lactic acid, cabbage stimulates the production of amino acid that promotes blood flow to the stomach lining.

This subsequently helps in strengthening the stomach lining and promotes fast recovery from a stomach ulcer.

What’s more, cabbage contains a good amount of vitamin C, which has been found to be beneficial in treating infections caused by H. pylori.

Raw Honey can be used to get rid of stomach ulcers.

Honey contains an enzyme called glucose oxidase which produces hydrogen peroxide, which in turn kills harmful bacteria that cause ulcers.

What’s more, honey helps soothe and reduces the inflammation of the stomach lining.

This will help cleanse your bowel, strengthen the stomach lining and prevent and heal stomach ulcers.

Garlic is a very popular spice that you can conveniently use in healing stomach ulcers.

Research studies show that the antibacterial and antimicrobial properties of garlic can help checkmate the levels of H. pylori the most common cause of stomach ulcers.

Coconut and its extracts (water, oil, and milk) can be used to cure stomach ulcers due to its antibacterial properties.

It is surprising to know that fenugreek has powerful healing properties and health benefits.

Very importantly, you can use it to treat peptic ulcers.

Fenugreek is rich in a mucilaginous compound, which protects the stomach’s lining by coating it like mucus, thereby enhancing the healing process.

Licorice can also be used to treat stomach ulcers.

Studies reveal that licorice works effectively for the treatment and prevention of stomach ulcers.

It aids the stomach and intestine in producing more protective mucus that forms a protective barrier over the stomach lining. Thus easing the pain from ulcers and speeding up the healing process.

If your condition is mild to moderate, these natural remedies will give you a positive result within a week.

However, if you are suffering from an acute stomach ulcer, please consult your doctor for proper examination.

11 Natural Home Remedies to Get Rid of Razor Bumps