What Are The Symptoms Of Pregnancy For The First Month?

by Team ThriveNaija
in Women
0

For a lot of people, the first month of pregnancy is where most pregnancy symptoms are experienced, if you are newly pregnant or trying to conceive, you will definitely have lots of questions that would revolve around symptoms to watch out for.

Symptoms can strike at any time of the day or night and for some people, it starts right from the very first month.

Pregnancy is divided into three trimesters, each trimester is a little longer than 13 weeks and symptoms tend to change every trimester however the first month marks the beginning of the first trimester.

It is natural to have questions during the first months of pregnancy and while pregnancy tests and ultrasounds are the most likely ways to determine you are pregnant, there are other signs and symptoms that can be watched out for.

When Do The Pregnancy Symptoms Start?

Understanding your symptoms is just as important as knowing when these symptoms are likely to start, body varies though and most people often claim they experience these symptoms within the first week of pregnancy.

The expected delivery date would be calculated using the first day of your last period and this means the first weeks where you may not have symptoms counts towards your 40-week pregnancy stage.

Many people might not remember exactly when they started their last menstrual period but that’s okay. An ultrasound is the surest way to find out about gestational age, nonetheless, you’ll find this post useful (3).

Symptoms Of First Month Of Pregnancy

We have rounded up 14 of the most common signs of being pregnant to prepare you for them and you can be well aware if you need to see your doctor.

This is the first sign every lady tends to look out for, once implantation is complete your body will begin producing human chorionic gonadotropin (hCG).

This hormone helps the body maintain the pregnancy and it also tells the ovaries to stop releasing mature eggs each month hence the missed period (4). 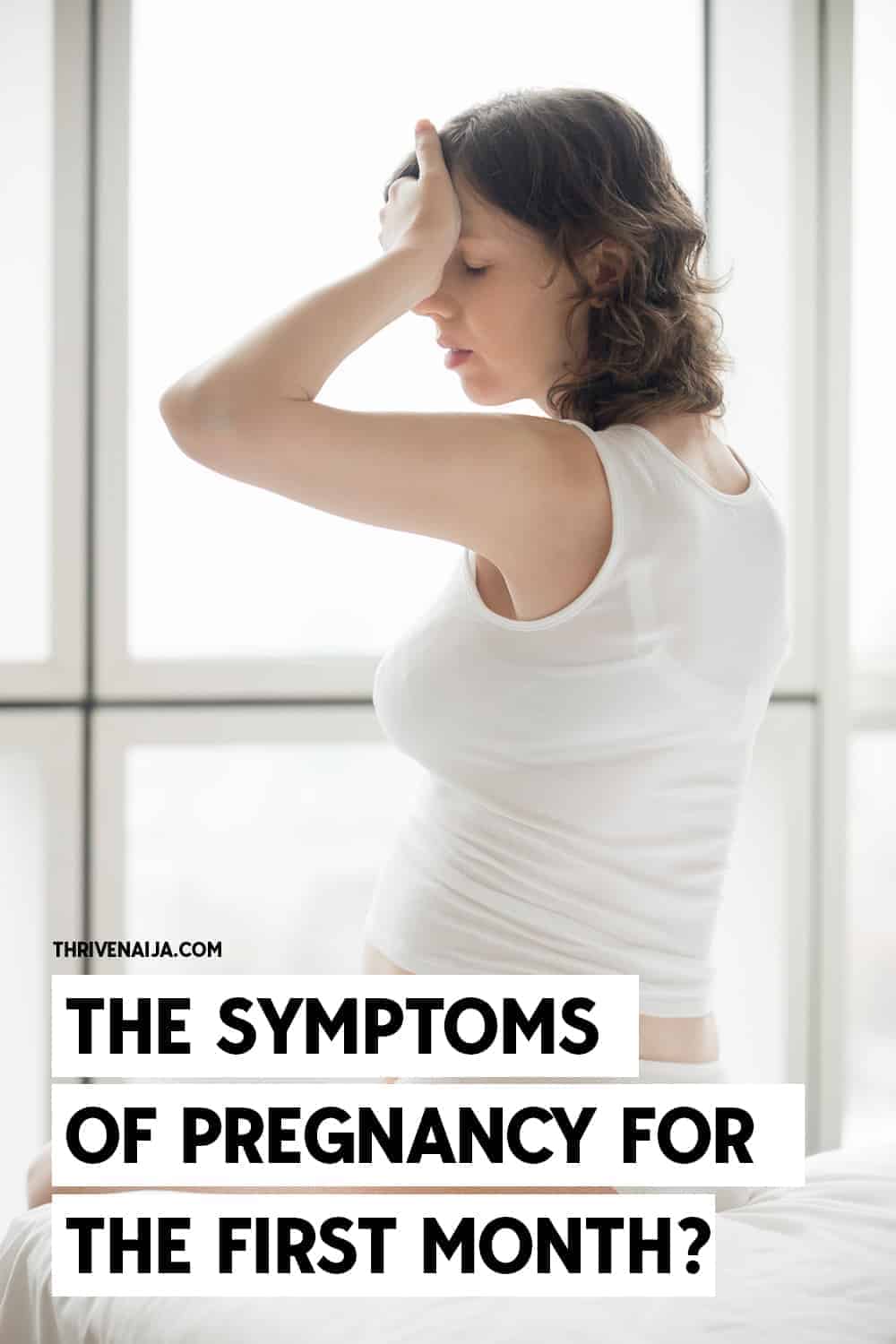 Raised body temperature is another common first-month symptom of pregnancy, your body’s core temperature may increase more easily during exercise or in hot weather. You will need to stay hydrated during this time which means more water and exercise cautiously.

Your hormones are going to be playing a lot of role on your bladder during this period which would lead to frequent urination, you may find yourself running to the bathroom more frequently or accidentally leaking.

During pregnancy, your body increases the amount of blood it pumps which causes the kidney to process more fluid than usual and which in turn leads to more fluid in your bladder.

You should learn to plan out your bathroom trips ahead of time to avoid incontinence and it’s recommended to drink 300 ml, a little more than a cup of extra fluid every day. 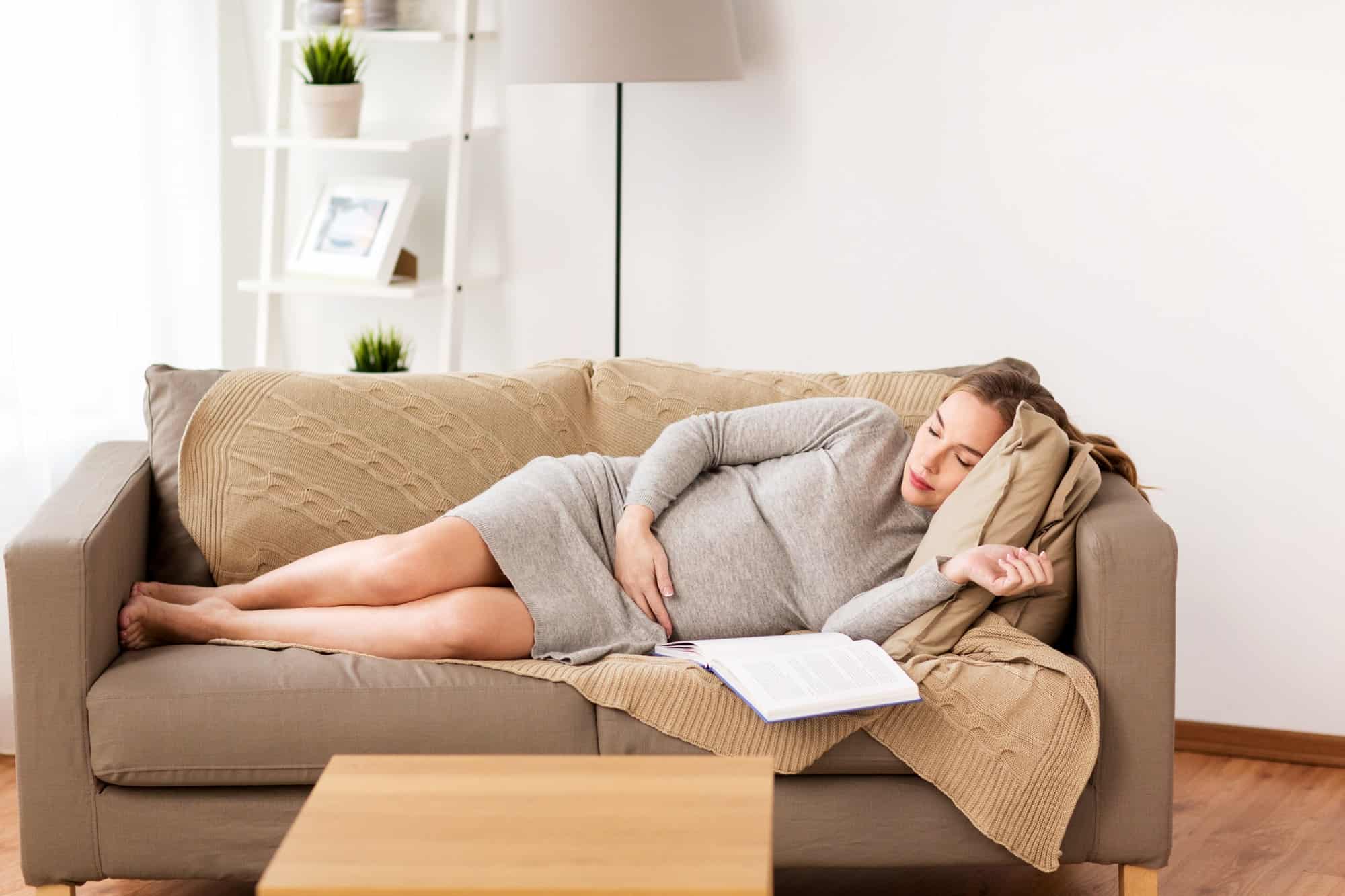 Many women have a heightened sense of smell during pregnancy and it’s one of the most common signs within the first month, and it may also cause strong distaste for food. There is little scientific evidence about the smell sensitivity during the first trimester.

Smell sensitivity is quite important as it may trigger nausea and vomiting. Studies also show that women tend to rate odor as more intense during their first trimester.

Tingling and aching in the breast is one of the most common signs of being pregnant, in the first stage pregnancy breasts will fill out and change shape as they prepare to produce milk, hormones will also cause your breast to grow. Nipples and breast changes can also occur around week 11.

Mood swings are common during pregnancy and may cause feelings of depression, anxiety, irritability, and euphoria.

During the first month of pregnancy, women expand their blood volume by approximately 30-50% and this is accompanied by an increase in cardiac output which is normally caused by hormones, palpitation, and arrhythmias that are quite common in pregnancy.

At the early stage, your pregnant body is working hard to grow the baby hence the body will need 300 extra calories a day and most women find themselves craving foods they would normally not dream of eating while others simply feel hungry all day long.

Morning sickness is actually the next symptom after the menstrual period, it tends to happen around week 4 to 6 and although it’s called morning sickness, it can happen at any time of the day, it’s unclear what exactly causes morning sickness, nausea and, vomiting but hormones can be a major factor.

During the first trimester, many women experience mild to severe morning sickness and it might become intense towards the end of the first semester and less severe as you enter the second trimester.

Ensure to stay hydrated by drinking lots of water and you can keep a package of saltine crackers by your bed to eat a few before you get up in the morning to help settle morning sickness.

Pregnancy glow is something most women appreciate during pregnancy, it is also referred to as a physiological change of one of the blessings of pregnancy. the increased activity of your body’s oil gland gives your skin a flushed glossy appearance and on the other hand, there is acne that can occur on any part of your body.

The increase in oil can make your skin too oily and sometimes trigger acne which is known as pregnancy acne.

Many of the symptoms experienced during the first trimester of pregnancy will start to fade once you enter the second semester, talk to your doctor about any symptoms that might interfere with your daily life, a suitable way to control this will be taken together. Every woman signs and symptoms tend to differ but above are most of the primary symptoms of pregnancy to watch out for.

What Are The Best Foods to Eat For Dry Skin?

15 Beautiful Hairstyles With Side Bangs to Try