by Team ThriveNaija
in Lifestyle
0

Moringa plant is beginning to gain more popularity as a new “superfood” for its highly nutritious profile and powerful anti-inflammatory, antioxidant, and tissue-protective properties.

Moringa oleifera, also known as drumstick tree, horseradish tree or ben tree, is a valuable and versatile plant in the Moringaceae family.

This important medicinal tree is a native to India, Pakistan, and Nepal that has been used for generations in Eastern countries to treat and prevent diseases such as diabetes, heart disease, anemia, arthritis, liver disease, and respiratory, skin, and digestive disorders (1).

Moringa has become popular as a leaf powder supplement, although the pods, roots, bark, flowers, seeds, and fruits are also edible.

It’s used as a traditional remedy for many ailments such as relief from stomach disorders, allergies, and edema.

Moringa is rich in vitamins, minerals, and amino acids.

It contains significant amounts of vitamins A, B, C, and E; calcium, potassium, iron, magnesium, phosphorous, zinc and protein (2).

Keep reading as we extensively discuss the numerous health benefits of moringa.

This means it prevents the damage and degradation that free radicals cause in the cells of different organs in the body, keeping them healthy and functioning at their best (6).

Research studies has revealed that moringa leaf powder has been effective at reducing lipid and glucose levels and regulating oxidative stress in diabetic patients, which means it lowers blood sugar and cholesterol and improves protection against cell damage (7,8).

It protects the cardiovascular system.

Moringa extracts are helpful in the prevention of myocardial or cardiac damage, due to the presence of powerful antioxidants (10).

Moringa leaf powder has heart-healthy benefits, particularly in blood lipid peroxidation and control, the prevention of plaque formation in the arteries, and reduced cholesterol levels (11, 12, 13).

Research studies conducted on this subject have provided supporting evidence that proves the antiperoxidative and cardioprotective effects of moringa therapy (14).

Moringa extracts exert a hepatoprotective effect on the liver (15).

Moringa contains polyphenols in its leaves and flowers that protect the liver against oxidation, toxicity, and damage.

Research studies have proved that the effectiveness of moringa leaves against the liver damage caused by anti-tubercular drugs as well as its stimulating effects in speeding up the recovery process (16).

Moringa can reduce liver damage and fibrosis and reverse oxidation in the liver (17).

The functionality of the liver is possible only with the aid of liver enzymes. For instance, lower levels of hepatic enzymes can impair its ability to filter the blood.

Moringa also helps to restore the levels of glutathione content in the body and prevents radiation-induced hepatic lipid peroxidation (19, 20).

This protective effect is attributed to the presence of phytochemicals such as catechin, epicatechin, ferulic acid and vitamin C found in moringa. 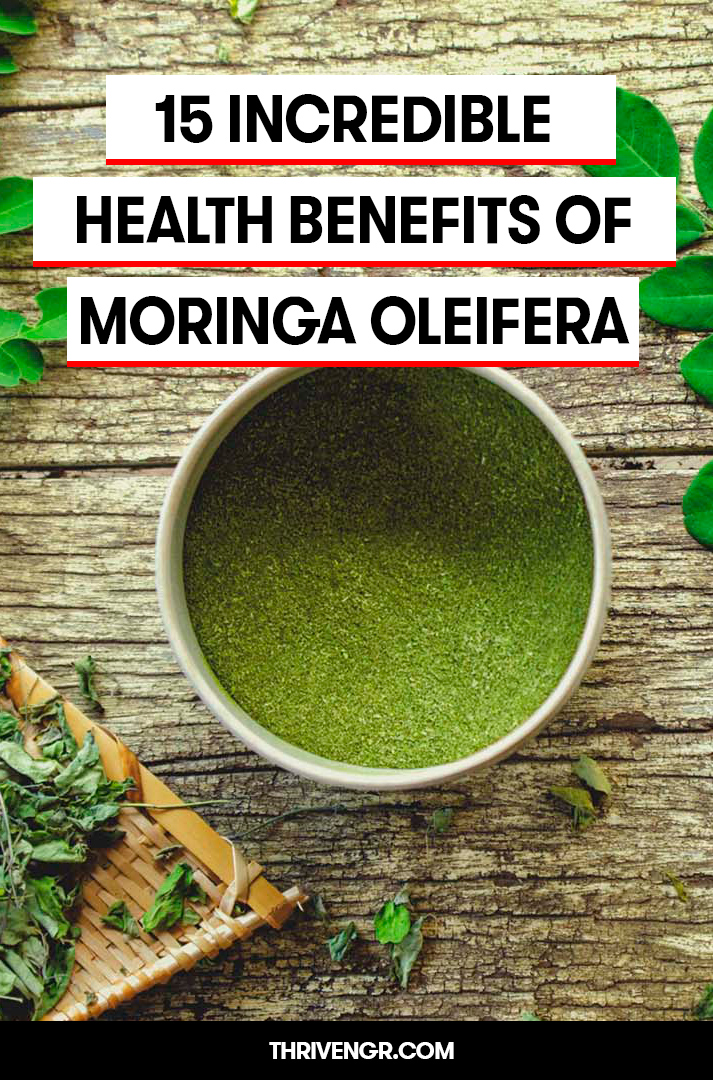 Moringa has blood-clotting properties in its leaves, roots, and seeds that enhance wound healing and can reduce clotting time, which means it reduces the time it takes for scratches, cuts, or wounds to stop bleeding (21, 22).

It’s been effective against types of fungi that cause infections on skin and strains of bacteria responsible for blood and urinary tract infections and digestive problems (24, 25).

The effectiveness of moringa has been very valuable in the treatment of neurodegenerative diseases.

Moringa supports brain health and cognitive function because of its antioxidant and neuro-enhancer activities. It’s also been tested as a treatment for monoaminergic deficiencies related to Alzheimer’s disease with favorable preliminary results (27).

Research studies have shown that treatment with moringa extracts is also able to normalize the neurotransmitters serotonin, dopamine, and noradrenaline in the brain, which play a key role in memory, mood, organ function, responses to stimulus such as stress and pleasure, and mental health, for example in depression and psychosis (28, 29).

Moringa reduces inflammation by suppressing inflammatory enzymes and proteins in the body, and moringa leaf concentrate can significantly lower inflammation in the cells (30, 31).

Studies suggest that the efficacy of moringa herb stands equal with the potent anti-inflammatory medicine indomethacin in the treatment of painful conditions (32).

The isothiocyanates present in Moringa are effective in the treatment of abdominal disorders such as constipation, gastritis and ulcerative colitis.

Research Studies have shown that moringa extracts can be considered as an effective herbal alternative to a range of commercially available antacids and antihistamines (33).

Another Study has shown that treatment with moringa oleifera leads to reduced ulceration and its efficacy in curing ulcerative colitis is comparable with the commercially available drug prednisolone (34).

Due to its antibacterial properties, it exerts an inhibitory effect on the growth of enterobacteria like Helicobacter pylori and coliform bacteria which triggers condition like diarrhea

Moringa is an anticancer agent and is highly valued in tumor therapy.

Scientific study has demonstrated the role of the bioactive compound niazimicin in restraining the development of cancer cells (35).

Another research has demonstrated that moringa extracts possess chemopreventive properties attributed to the presence of the phenolic components quercetin and kaempferol (36).

Moringa oleifera is effective in maintaining optimal blood pressure level in the body (40).

Bioactive components such as isothiocyanate and niaziminin that are present in it prevent the thickening of arteries and slows down the development of pulmonary hypertension (41).

Moringa oleifera extracts are beneficial for maintaining healthy bones, which is attributed to the presence of essential minerals like calcium and phosphorous.

Its extracts possess anti-inflammatory properties and are effective in the treatment of painful conditions such as arthritis, while also helping to heal various bone ailments such as mandibular or jaw bone fracture (42, 43, 44)

Moringa seed oil is beneficial for the skin (45).

Moringa oil is applied directly to the skin as a drying, astringent agent used to kill bacteria, but at the same time when used regularly, it’s known to act as a lubricant and hydrate the skin by restoring its natural moisture barrier.

It’s a common ingredient used in food manufacturing and perfumes because it prevents spoilage by killing bacteria, plus it has a pleasant smell and reduces odors.

Moringa extracts are effective against the formation of stones in the kidney, bladder, and uterus.

Research studies show that administration of moringa root exerted anti-urolithiatic activity and resulted in a noteworthy reduction in the urinary oxalate levels (46).

Studies have revealed that the nephroprotective effect of moringa helps in attenuating renal injuries due to its high antioxidant content.

It serves as an effective bio-absorbent and helps in the removal of heavy metals and harmful toxins.

During pregnancy or when breastfeeding, it’s best to avoid moringa root and bark extract as they have abortion and anti-lactation effect.

It is a highly nutritious plant and is generally safe for consumption. However, its usage for therapeutic relief should only be considered after consultation with a qualified medical professional.

7 Foods for a Healthier Eyes (Backed By Science)

How To Grow Back Your Hairline Using Onion Juice & Coconut Oil

5 Foods That Are Bad For Your Eyes