Diabetes is a common health problem that affects more than 400 million people; this is according to the International Diabetes Federation.

There are three major and common types of diabetes; Type 1, Type 2 and gestational diabetes. Of the three, Type 2 is very common among the populace and in this article we are looking at type 2 diabetes causes.

It is estimated that 90 percent of people around the world diagnosed with diabetes have Type 2; this is according to the Centers for Disease Control and Prevention.

What makes Type 2 diabetes peculiar is that the pancreas produces insulin, but the cells are not able to use the insulin as well as they should. This process is termed “insulin resistance”.

The pancreas produces more insulin to try to mop up glucose from the bloodstream into the cells. But since the cells are not sensitive to insulin, the sugar builds up leading to high blood sugar level.

Many people who have Type 2 diabetes are not even aware they have the disease, and if left unchecked can contribute to various health complications associated with it.

This is another important reason you must look out for and know the risk factor of diabetes.

These risk factors for diabetes can be broadly divided into two; non-modifiable and modifiable.

While much cannot be done about the non-modifiable risk factors, there are some risk factors that can be controlled to help prevent yourself from developing this disease.

Your risk for developing Type 2 diabetes increases if one of your parents or sibling has diabetes.

According to the American Diabetes Association, your risk is;

Combining your family history with diabetes triggers like diet and exposure to certain health issues, your risk of developing diabetes increases.

Although much cannot be done about the genetic predisposition, you can strive to avoid the triggers.

Your risk of developing Type 2 diabetes increases with age.

Most at times, it occurs in middle-aged adults of say age 45. This can be due to the fact that most people tend to exercise less, gain weight and lose muscle mass with increasing age.

But this type of diabetes is becoming more prevalent in children, adolescent and younger adults mainly due to unhealthy diet and lifestyle choices.

It is recommended by health experts that all adults from age 40 should have their blood sugar level checked every month. Early detection is key to prevention and managing Type 2 diabetes.

A 2016 study published in Diabetes Care reports that the Asians, Hispanics, and the blacks are at a higher risk of diabetes, even before taking into considerations differences in body mass index.

On that note, African-American, Asian, Hispanic, Native American should make a lifestyle modification to reduce their risk.

Being overweight or obese exposes you to a greater chance of developing Type 2 diabetes.

This is because being overweight stresses the inner part of the individual cells called the endoplasmic reticulum (ER). When the ER is overstressed, it causes the cells to break down the insulin receptors on the cell surface.

This eventually leads to high concentrations of glucose in the bloodstream.

Also, if you have a lot of visceral fat (abdominal fat), your risk of Type 2 diabetes is greater than having fat in the parts of the body such as hips and thighs.

You can reduce your risk factor of developing Type 2 diabetes by losing 5 to 7 percent of your body weight.

As a woman, if you have developed diabetes during pregnancy, a condition known as gestational diabetes, then you are at a greater risk of developing Type 2 diabetes.

A 2013 study published in The Endocrine Society’s Journal of Clinical Endocrinology & Metabolism reports that women diagnosed with gestational diabetes during pregnancy have a higher risk of developing Type 2 diabetes in the future.

This factor is modifiable, and you can decrease your risk factor by living a healthy lifestyle during pregnancy

High blood is a common health condition that affects millions of people in the world. It causes damage to the cardiovascular system and if left untreated it can lead to the development of diabetes.

A 2013 study by the American Diabetes Association reports that less than half of people at risk for heart disease or Type 2 diabetes reported discussing biomarkers like high blood pressure with their doctors.

What’s more, the combination of hypertension and Type 2 diabetes significantly raises your risk of having a heart attack or stroke.

It is important to check your blood pressure regularly and keep your doctor’s advice.

The less active you are the higher your chances of developing Type 2 diabetes. Also. Physical activity helps weight loss, mop up glucose from the blood and make the cells more sensitive to insulin.

A 2011 study published in Medicine & Science in Sports & Exercise reports that ceasing regular physical activity impairs glycemic control (control of blood sugar levels), which suggest that inactivity may play a key role in the development of Type 2 diabetes. 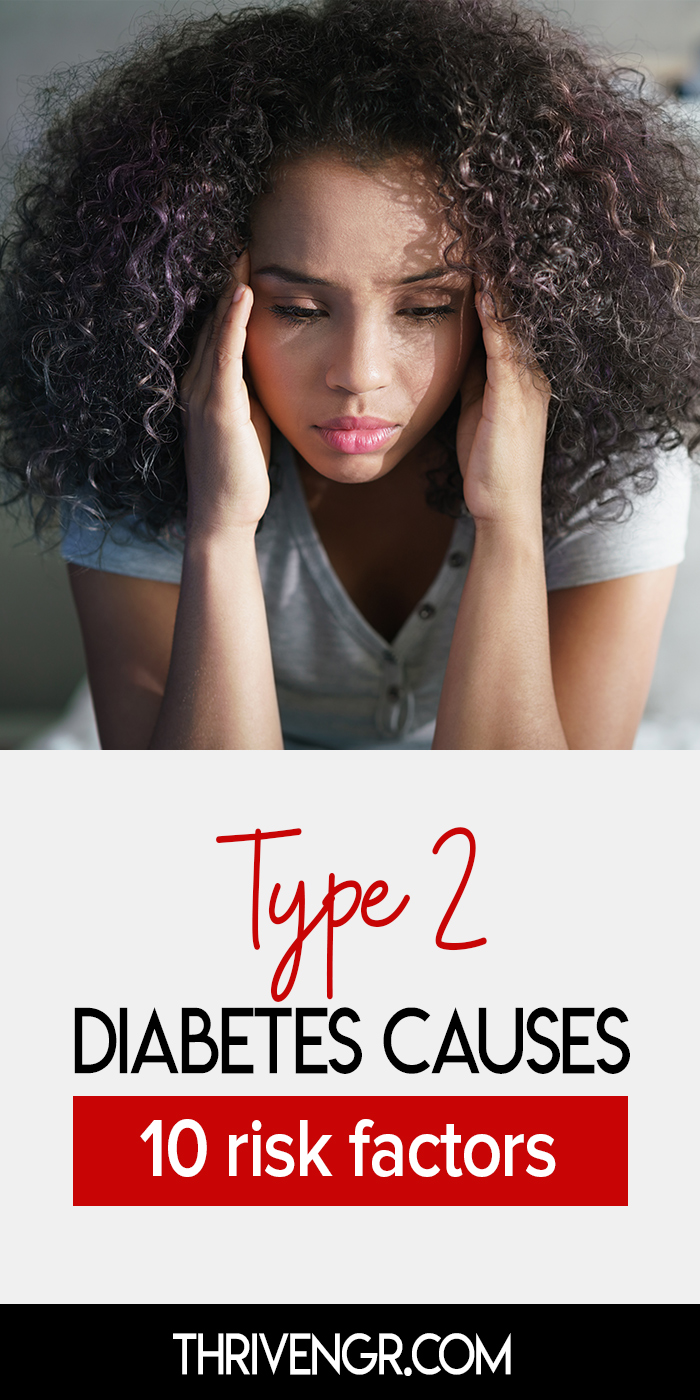 Prediabetes which is a milder form of diabetes is an obvious risk factor for developing Type 2 diabetes.

Prediabetes is said to be an increase in blood glucose levels above normal but below diabetes thresholds.

A 2012 study published in Lancet reports that prediabetes based on glycemic parameters above normal but below diabetes thresholds is a high risk for diabetes.

It further concludes that for prediabetic individuals, lifestyle modification is the cornerstone of diabetes prevention with evidence of a 40 to 70 percent relative risk reduction.

A simple blood test can help you diagnose prediabetes. If you have prediabetes, you need to get more active and lose some extra pounds.

Also, eat a healthy diet and follow recommendations given by your doctor.

For women who have polycystic ovary syndrome (PCOS) that causes irregular menstrual periods, excess hair growth and obesity are at a higher risk of diabetes.

A study published in Minerva Ginecologica reports that the risk of glucose intolerance among PCOS subjects seems to be approximately 5- to 10-fold higher than normal and appears not limited to a single ethnic group. Moreover, other risk factors like obesity, a family history of Type 2 diabetes and hyperandrogenism may contribute to increasing the diabetes risk in women with PCOS.

Another study published in Diabetes also confirms that the risk of Type 2 diabetes is markedly elevated in women with PCOS in middle-age, and therefore reinforces the need for routine screening of PCOS patients for diabetes over time.

Women suffering from PCOS can opt to healthy to relieve their conditions.

A 2016 study published in JAMA Cardiology reports that people who took statins to lower their levels of low-density lipoproteins (LDL or ‘bad’ cholesterol) were more vulnerable to Type 2 diabetes.

However, people with naturally lower LDL levels were less likely to develop heart disease but were also slightly more vulnerable to Type 2 diabetes. It was concluded by researchers that it’s likely that one’s LDL level is associated with diabetes risk, rather than an effect of the statins.

Emmanuel
View More Posts
Emmanuel is a Bio-chemist currently pursuing his masters degree in one of the most prestigious schools in Nigeria. He is passionate about health and fitness as well as creating guides to help you live a good life. Get in touch: [email protected]

10 European Countries That Are Easy to Migrate to

12 Influencers And Celebs Who Nailed The Baldie Look

10 Cheapest African Countries To Travel to After Lockdown

Self-care At Home Made Easy With These 9 Tips

7 Simple Hacks to Stay Sane As You Work From Home