Vitamin D also was known as “sunshine vitamin” is an essential vitamin required by the body for bone formation, calcium absorption, hormone formation, immune system functioning and alleviation of inflammation.

Vitamin D which is a fat-soluble vitamin is a very unique vitamin because it can be obtained from food and sun exposure.

However, up to 50% of the world’s population may not get enough sunlight and are deficient in vitamin D (1, 2).

This is partly because people spend more time indoors, wear sunblock outside and eat a Western diet low in good sources of this vitamin.

Excess vitamin D can cause the body to absorb too much calcium, leading to increased risk of heart disease and kidney stones.

The Reference Daily Intake (RDI) of Vitamin D is 400 IU per day from foods, but many health organizations recommend getting 600 IU (3).

If you don’t get enough sunlight, it should probably be closer to 1,000 IU per day (4). Keep reading as we highlight the highest vitamin D rich food sources to eat often.

Also Read: 12 Vitamin C Foods You Should Be All Up In

If you can contain the strong aroma, this oil is super-rich in vitamin D.

If you don’t like fish, taking cod liver oil instead can be a good way to obtain certain nutrients that are hard to get from other sources.

It’s been used for so many years to prevent and treat vitamin D deficiency in children (5, 6). Cod liver oil is also a fantastic source of vitamin A, with 90% of the RDI in just one teaspoon (4.9 ml). However, vitamin A can be toxic in high amounts.

However, it’s best to be cautious when taking cod liver oil and not take more than you need. Cod liver oil is also high in omega-3 fatty acids, which many people are lacking in.

Wanna stack up on cod liver oil? These are the highest rated, best sellings to buy on Amazon right now.

Mushrooms are the only plant source of vitamin D. Similar to humans, mushrooms also synthesize vitamin D when exposed to UV light from the sun (7).

The difference between Vitamin D production in mushroom and animals is that mushroom produces vitamin D2 whereas animals produce vitamin D3.

Although vitamin D2 does help raise blood levels of vitamin D, it may not be as effective as vitamin D3 (8, 9).

Commercially grown mushrooms, on the other hand, are often grown in the dark and contain very little vitamin D2.

Oysters are a type of clam that lives in salt water. They are delicious, low in calories and full of nutrients.

In addition, one serving of oysters contains 2–6 times more than the RDI of vitamin B12, copper and zinc — far more than multivitamins contain. 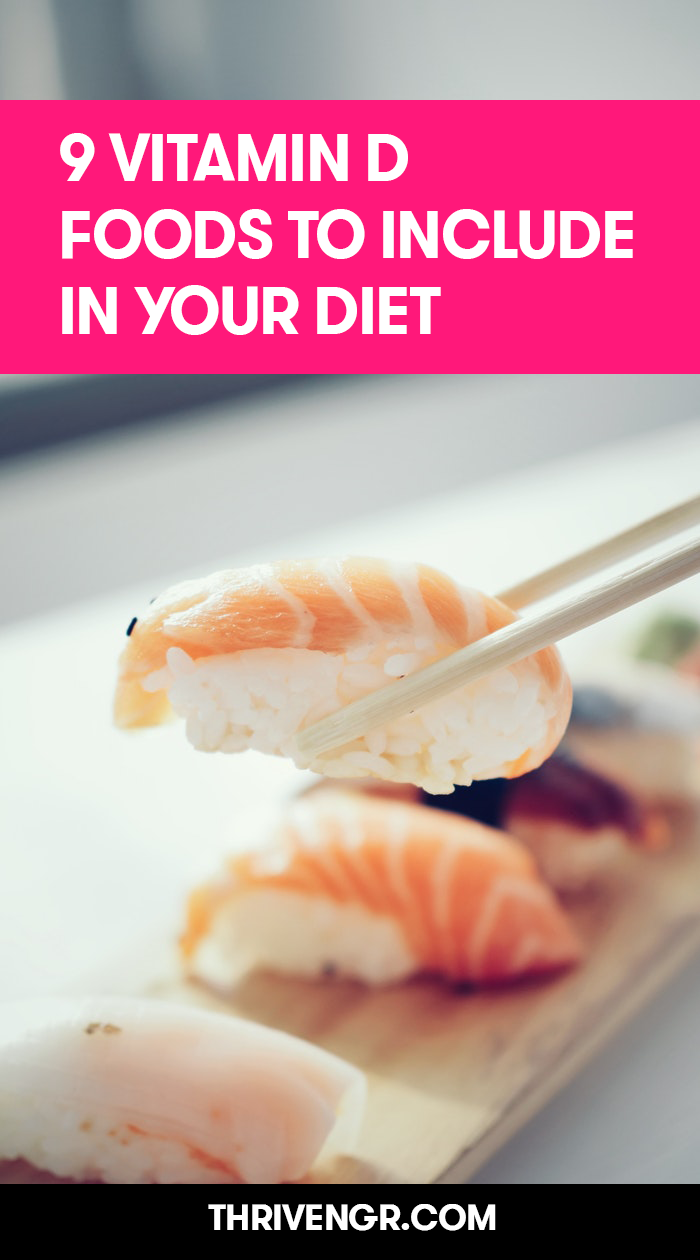 Shrimp is a popular type of shellfish.

Yet unlike most other seafood sources of vitamin D, shrimps are very low in fat. Despite this fact, they still contain a good amount of vitamin D — 152 IU per serving, or 38% of the RDI (13). They also contain beneficial omega-3 fatty acids, although at lower amounts than many other foods rich in vitamin D.

Shrimp alsocontainsn about 152 mg of cholesterol per serving, which is a significant amount. However, this should not be a cause for concern.

Many recent studies have shown that dietary cholesterol intake does not have a big effect on blood cholesterol levels.

Even the 2015 Dietary Guidelines have removed the upper limit for cholesterol intake, stating that overconsumption of cholesterol is not an issue (14, 15).

Salmon is a popular fatty fish with a great amount of vitamin D.

However, it is usually not specified whether the salmon was wild or farmed. This might not seem important, but it can make a big difference.

Some studies have found even higher levels in wild salmon, ranging up to 1,300 IU per serving (18).

Sardines are one of the best dietary sources of vitamin D.

These tiny canned fish are also a great source for vitamin B-12, omega-3 fatty acids, protein, and selenium. You should eat more sardines.

Luckily for people who don’t like fish, cod liver oil and seafood, these are not the only food source of vitamin D. Whole eggs are another good source, as well as a wonderfully nutritious food.

While most of the protein in an egg is found in the egg white, the fat, vitamins and minerals are found mostly in the egg yolk. One conventionally grown egg yolk contains between 18 and 39 IU of vitamin D, which isn’t very high (21, 22).

However, pasture-raised chickens that roam outside in the sunlight produce eggs with levels that are three to four times higher (23).

Additionally, eggs from chickens fed with vitamin D-enriched feed have levels increased up to an incredible 6,000 IU of vitamin D per yolk (24).

So eating egg will provide approximately 21% of your daily needs

It is also a good source of niacin and vitamin K (25).

Unfortunately, canned tuna is often associated with methylmercury, a toxin that is found in many types of fish. If it builds up in the body, it can cause serious health problems in humans (26).

However, some types of fish pose less risk than others. Light tuna is typically a better choice than white tuna, and it’s considered safe to eat up to 6 oz per week (27).

Natural sources of vitamin D are limited, especially if you’re a vegetarian or don’t like fish.

Fortunately, some foods that don’t naturally contain vitamin D are fortified with it.

Cow’s milk, the type of milk that most people drink, is naturally a good source of many nutrients including calcium, phosphorous and riboflavin (28).

Because vitamin D is found almost exclusively in animal products, vegetarians and vegans are at particularly high risk of not getting enough of (31).

For this reason, plant-based milks such as soy milk are also often fortified with it, as well as other vitamins and minerals usually found in cow’s milk.

For this reason, some countries fortify orange juice with vitamin D and other nutrients, such as calcium (36).

Although fortified cereals and oatmeal provide less vitamin D than many natural sources, they can still be a good way to boost your intake. Also if you have serios vitamin D deficiencies, it doesn’t hurt to get yourself some vitamin D supplements, serums, with the consent of your doctor. These are the best to buy on Amazon;

Spending some time outside in the sun is one of the best ways of getting your daily dose of vitamin D.

However, this is not the case for many people who don’t get sufficient exposure The vitamin D foods listed in this article are some of the top sources of vitamin D available.

Eating plenty of these vitamin D-rich foods is a great way to make sure you get enough of this important nutrient.

Alicia Butner
View More Posts
Alicia is the editor-in-chief @ TheModeMag.com. She is a health and fitness enthusiast as well as a freelance writer that has written for many awesome publications like NutritionRealm, 7Stuff. Get in touch [email protected]

CelebsThatRock E33: 20 Celeb Approved Ways To Up Your Style Game

11 Black Hair Care Products You Need In Your Life

Multivitamins: Everything You Need To Know About Them

The Most Important Vitamin, Mineral Supplements For Vegans